Wynn Hosts Sharing Session on the Spirit of "Two Sessions" 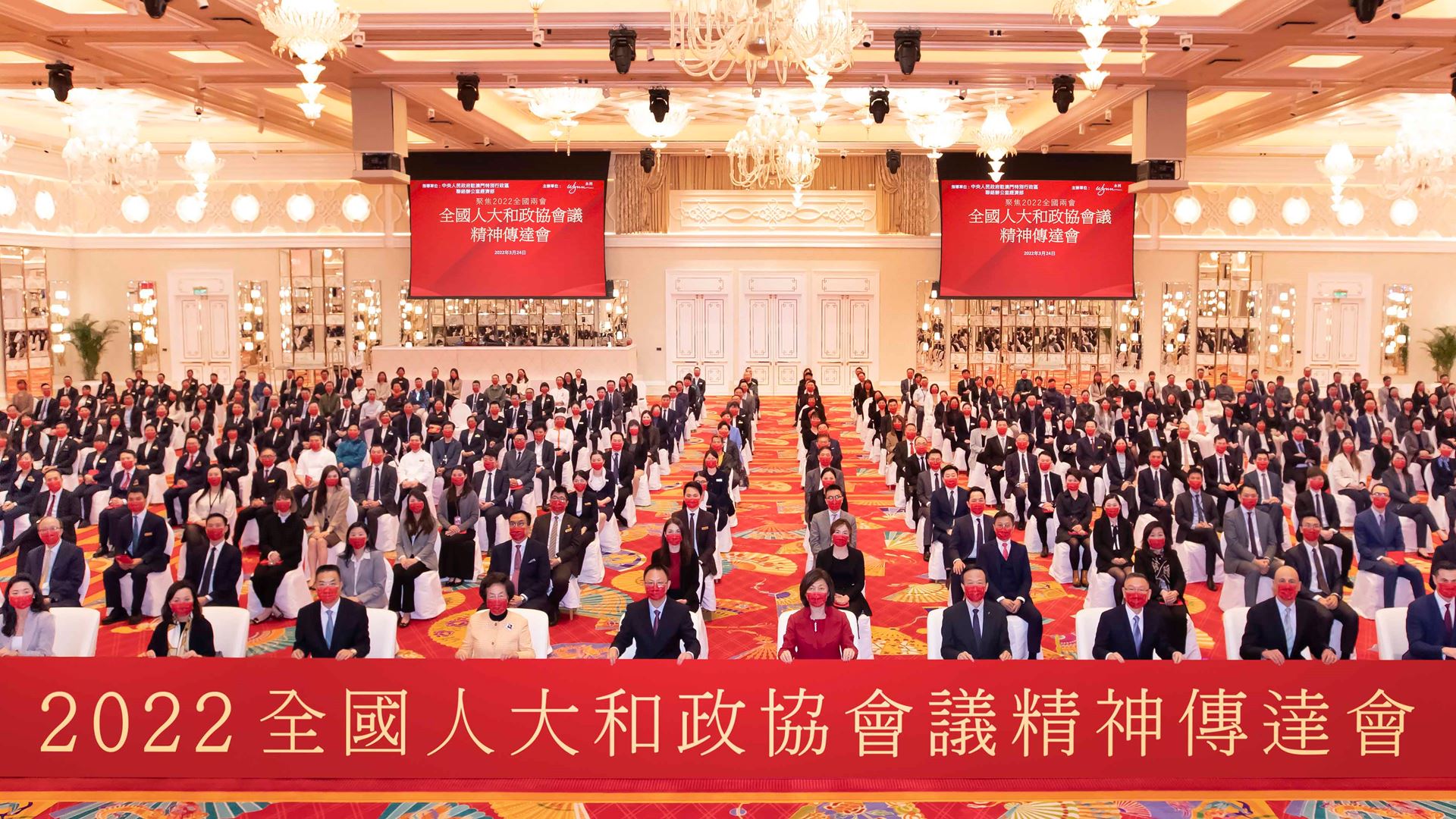 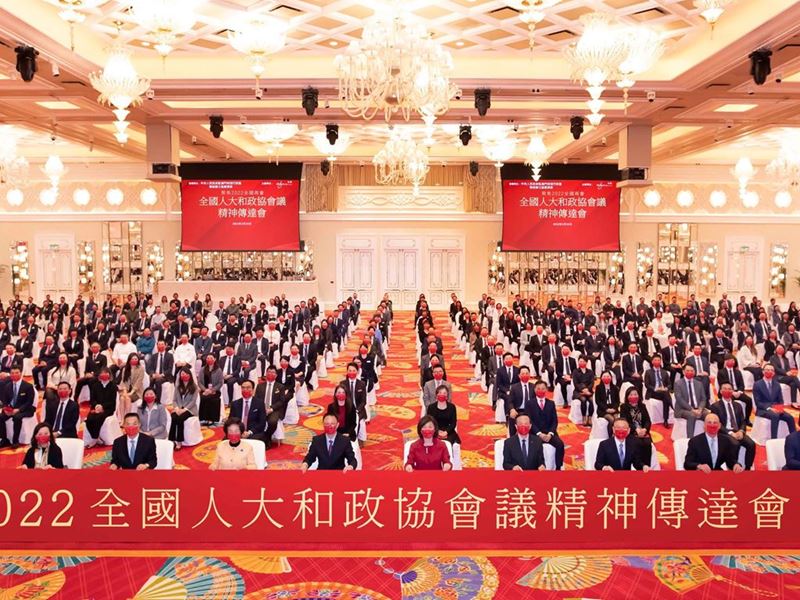 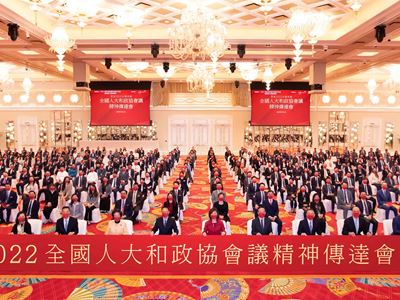 Macau, March 25, 2022 – The fifth session of the 13th National People's Congress (NPC) and the fifth session of the 13th National Committee of the Chinese People's Political Consultative Conference (CPPCC) (hereinafter referred to as the "Two Sessions") were recently held successfully in Beijing. In order to enable team members to better understand this year's events, Wynn hosted a sharing session on the spirit of the NPC and CPPCC at Wynn Palace on March 24, 2022. Mr. Lao Ngai Leong, Macao Deputy of the NPC and the Head of the Macao Delegation; Mr. Jose Chui Sai Peng, Macao Deputy of the NPC and Deputy Leader of the Macao Delegation, Ms. Ho Teng Iat, Member of the CPPCC National Committee and Vice Chairman of the Committee for Liaison with Hong Kong, Macao, Taiwan and Overseas Chinese of the National Committee of the CPPCC; and Mr. Zhang Zongzhen, Member of the CPPCC National Committee, were invited as keynote speakers to provide an overview and share the key highlights of this year's Two Sessions, enabling the team members to appreciate and understand the current situation in China and the latest trends in regional development. In addition, Wynn was also honored to invite the Economic Affairs Department of the Liaison Office of the Central People's Government in the Macao SAR as an adviser, with Deputy Director Mr. Yang Yi joining the event.

During the sharing session, the four keynote speakers shared the key points of "The Report on the Work of the Government" and the Two Sessions, providing participants with an in-depth analysis on supporting the overall national development and sharing insights on how Macao can seize the opportunities. Mr. Lao Ngai Leong said that China has always been supportive of the moderately diversified economic development of Macao, while the development and construction of Hengqin is a key deployment made by the national leader based on Macao's actual situation. This strategic approach can bring Macao significant opportunities in its industrial restructuring. Therefore, it is necessary to firmly grasp opportunities arising from the development of the nation and write a new chapter in the practice of "One country, Two systems" with Macao characteristics for a new era.

Ms. Ho Teng Iat said that "The Report on the Work of the Government" has incorporated the principles of 'ensuring central government's overall jurisdiction over Hong Kong and Macao' and 'patriots governing Macao' for the first time, reflecting the firm determination of the central government to implement "One Country, Two Systems". The Two Sessions emphasized the need to strengthen the unity of the Chinese people, and she believes that during this challenging time, it is even more important to bring together all sectors in Macao to overcome difficulties, maintain overall stability, and make concerted efforts on pandemic prevention and control, and economic recovery.

Mr. Zhang Zongzhen shared China's five major advantages with members of the Wynn team. Based on his experience of the CPPCC meeting, he suggested that Hengqin and Macao should first focus on constructing the necessary infrastructure for an innovation ecosystem. The cluster of more innovative talents and other elements of innovation relies on building a productive ecosystem. He also mentioned the four major industries in accordance with the development plan for the Guangdong-Macao In-Depth Cooperation Zone in Hengqin, including sci-tech research and high-end manufacturing; traditional Chinese medicine and other Macao signature businesses; culture, tourism, convention and trade; and modern finance. As such, the education sector is recommended to orient itself around these four major aspects by focusing on cultivating the relevant talents. Zhang also shared an impromptu overview of the democratic practices of the Communist Party of China and Party's century-long history, which have played a significant role in contributing to the development of democratic civilizations.

Ms. Linda Chen, Vice Chairman and Executive Director of Wynn Macau, Limited, said, "China's 14th Five-Year Plan is closely related to the prosperity and development of Macao. Wynn sincerely thanks all of the guest speakers for sharing details of the national development strategy with our team, which is of great importance as we accelerate integration into the country's future development path. The four guest speakers not only clearly conveyed the spirit of the two sessions, but also let our team members better understand the significance of integrating into the national development plan, promoting the moderately diversified economic development of Macao, and blending into the construction of the Guangdong-Macao In-Depth Cooperation Zone in Hengqin, in terms of both policy and practicality. They also enabled our team to further understand how to contribute to the development opportunities created by the country for Macao."

To minimize risks amid the pandemic, nearly 400 participants and working staff strictly abided by the relevant guidelines on pandemic prevention. This included no catering services during the event, the participants' presentation of valid proof of a negative COVID-19 nucleic acid test result within 24 hours before the event, mandatory mask-wearing, and provision of mask and anti-pandemic kits for all attendees, collaboratively guarding against the pandemic.

Wynn also livestreamed the sharing session to the back-of-house areas to more than 1,500 team members, as well as live broadcasting the whole event via the Wynn Care Facebook page to reach the public and 12,500 Wynn team members, reinforcing the core value of being patriotic to the country and to Macao.

Wynn senior management team members actively participated in the event, including Ms. Linda Chen, Vice Chairman and Executive Director of Wynn Macau, Limited; Mr. Frederic Luvisutto, Chief Operating Officer of Wynn Palace; Ms. Zuleika Mok, Senior Vice President of Human Resources of Wynn Macau, Limited; Mr. Craig Jeffrey Fullalove, Senior Vice President and Chief Financial Officer of Wynn Resorts (Macau) S.A; Ms. Maggie Guan, Senior Vice President and General Counsel of Legal of Wynn Macau and Wynn Palace; and Ms. Katharine Liu, Senior Vice President of Communications of Wynn Macau and Wynn Palace. They led the team members of various departments to organize and take part in the sharing session, showcasing the positive response of the whole company to the event. The sharing session provided on-site English simultaneous interpretation to convey the spirit of the Two Sessions for non-Chinese speakers. During the Q&A session, Wynn team members took the opportunity to ask the speakers further questions on the spirit of this year's Two Sessions, policy direction and their areas of concern, particularly the innovative opportunities that young and middle-aged people can grasp in the development of the Guangdong-Macao In-Depth Cooperation Zone in Hengqin, the prospects for the future of Macao's economy, and the business opportunities brought by the future development of the Greater Bay Area to the Macao people.

Every year, Wynn organizes sharing sessions on the theme of the "Two Sessions" to share China's development strategies with team members and deepen their understanding of the direction of national policy. These sharing sessions have received a consistently positive response from various departments at Wynn, including senior management, back-of-house executives, and frontline staff, reflecting Wynn's patriotic dedication to the country and Macao, as well as its care for the community as an international enterprise with deep roots in Macao.