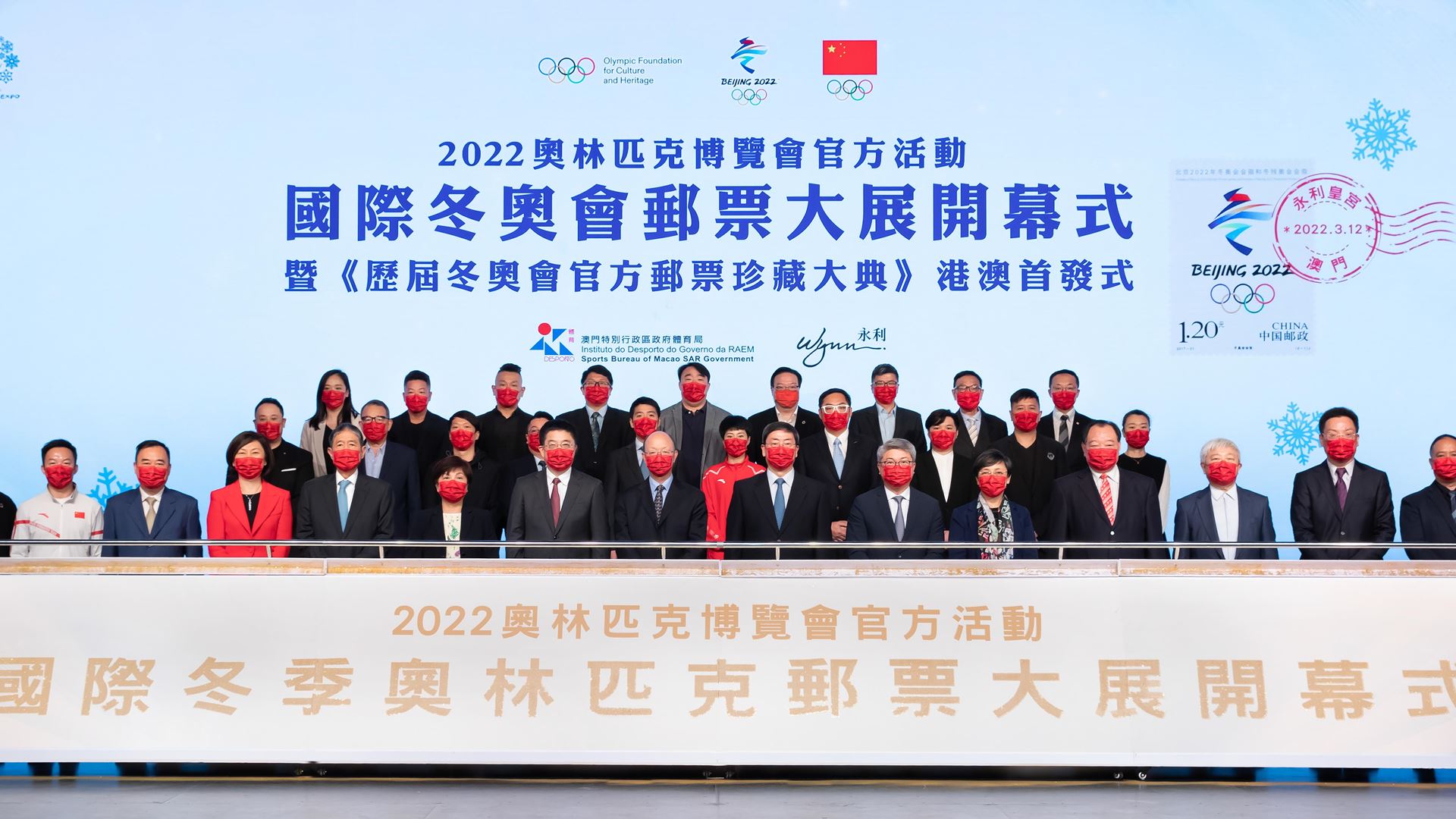 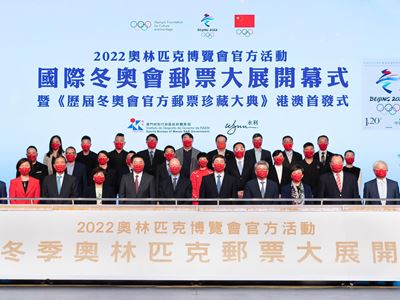 Macau, March 12, 2022 – The Olympic Games is not just a global event, but also a major platform for promoting international exchange and a significant achievement that fully embodies the implementation of China's development philosophy. To extend the Olympic spirit and further promote the excitement around the nation's capital becoming the world's first dual Olympic city, the "Olympic Expo Official Project: Opening Ceremony for the International Winter Olympic Stamps Exhibition and Launch Ceremony for the Olympic Winter Games Stamps Collection in Hong Kong and Macao" was held today (March 12) at Wynn Palace. The events were title sponsored by Wynn Resorts (Macau) S.A., organized by the Olympic Expo, and co-hosted by StarMac Entertainment Production Co., Ltd. From now until March 25, the International Winter Olympic Stamps Exhibition is open to the public free of charge, presenting a unique collection of renowned Winter Olympic Games stamps, and showcasing the century-long history of the Winter Olympics for both residents and tourists.

The exhibition features more than 260 sets of original stamps issued by the host countries of past Winter Olympic Games since 1932, as well as a rare set of the world's first Olympic stamps for the 1896 Athens Olympics. The entire exhibition and stamp collection took five years to prepare, spanning 13 countries and 24 Winter Olympics. These stamps not only provide a comprehensive record of the historical development of the Winter Olympic Games, but have also become an integral part of the Olympic culture, becoming a valued part of history. In her speech, Ms. Linda Chen, President and Executive Director of Wynn Resorts (Macau) S.A., said that Wynn is proud to participate in organizing the Olympic Expo Official Project. As the first-ever stamp exhibition of the Winter Olympics in Chinese history, it carries added significance in showing the glamor of Olympic culture and helping to popularize knowledge of the Olympics.

To coincide with the opening of the exhibition, the organizers also held the Launch Ceremony for the Olympic Winter Games Stamps Collection in Hong Kong and Macao at the same time. This revealed the first complete collection of commemorative stamps to be introduced by the International Olympic Committee, featuring over 230 stamps issued by the US, the UK, France, Germany, Italy, Japan, South Korea and other Winter Olympics host countries over the past 100 years, from the first event in 1924 to the Pyeongchang 2018 Winter Olympic Games. Based on careful selection of the original stamps, the collection was created over a period of five years and compiled into a book. A limited edition of 2,022 sets will be published globally. This reflects the dedicated support of the International Olympic Committee for the development of China's Olympic efforts, and it also embodies the best wishes of people from around the world for the Beijing Winter Olympics.

Other guests who attended the event include: Mr. Song Luzeng, Vice President of the Olympic Council of Asia; Mr. Yan Jianchang, Secretary General of the Samaranch Foundation; Mr. Pun Weng Kun, President of Macao Sports Bureau; Mr. Wan Su Cheng, Director General of the Department of Publicity and Culture of the Liaison Office of the Central People's Government in the Macao SAR; Ms. Maria Helena de Senna Fernandes, Director of the Macao Government Tourism Office; Ms. Lau Wai Meng, Director of the Macao Post and Telecommunications Bureau; Mr. Xu Haifeng, China's First Olympic Gold Medal Winner; Mr. Ma Iao Hang, President of the Sports and Olympic Committee of Macao; Mr. Chan Chak Mo, Secretary General of the Sports and Olympic Committee of Macao; Mr. Xia Sijun, Secretary General of the Organising Committee of the Olympic Expo and Executive President of the Beijing Association for the Promotion of Olympics Related Culture; Mr. Hou Kun, Member of the IOC Culture and Olympic Heritage Commission and Vice President of the China Sport Philately and Collection Association; Mr. Chan Iok Wai, Head of the Department of Students of the Education and Youth Development Bureau of the Macao SAR; Mr. Lam Vai Ip, Head of the Division of Visual Art of the Cultural Affairs Bureau of the Macao SAR; and Ms. Zhang Hui, Olympic Champion and Flag Bearer at the Opening Ceremony of the Beijing 2022 Winter Olympics; and Mr. Guo Weiyang, Olympic Champion.

To further promote insights into the Olympics and showcase the excitement of the Olympic Games, Wynn invited a delegation of China's Olympic champions to take part in an exchange session with Macao youth at Wynn Palace on the same day. Mr. Xu Haifeng, China's first Olympic gold medalist; Mr. Zhang Hui, the Olympic champion of short track speed skating and flag bearer at the opening ceremony of the Winter Olympics; and Mr. Guo Weiyang, Chinese gymnastics Olympic champion, interacted with more than 100 secondary and university students in Macao. The athletes promoted the spirit of perseverance in sportsmanship and spread the joy of their triumphant gold medal performances at the Olympic Games. The event also enabled students to experience the charisma of the Chinese athletes up close.