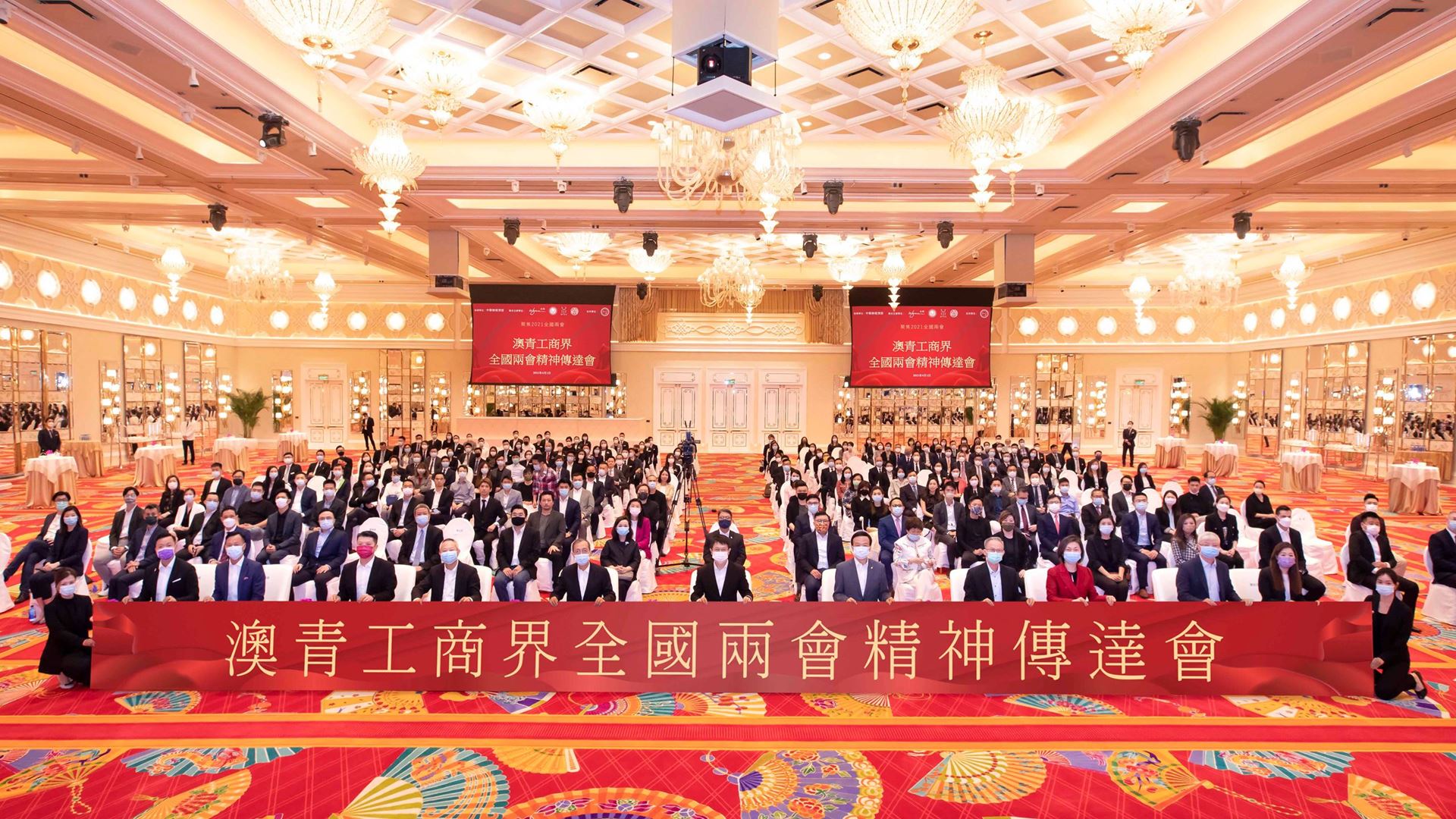 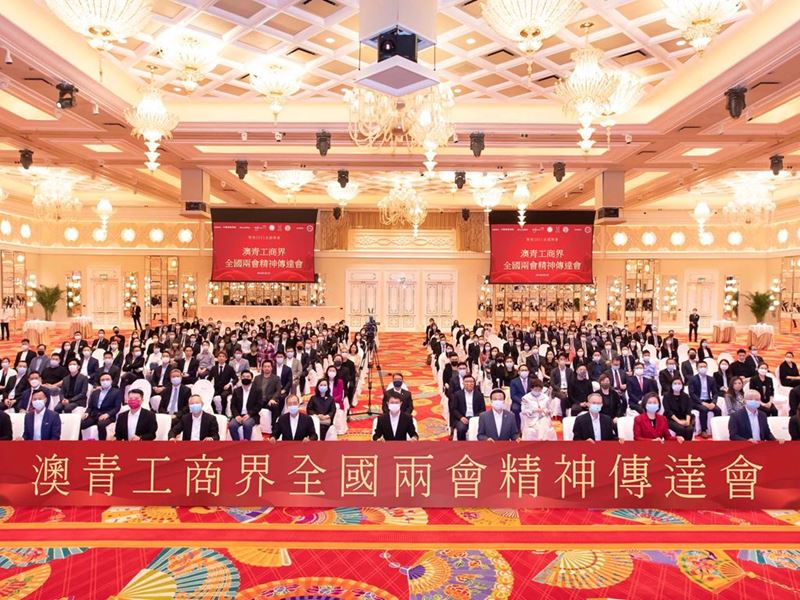 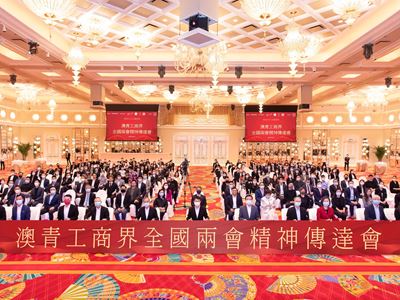 Macau, April 1, 2021 – Wynn joined hands with the Industry and Commerce Association of Macau, International Youth Entrepreneur Association and the Youth Elites Association Macau to co-host a sharing session at 11 am today in the Grand Theater at Wynn Palace on the spirit of the National People's Congress (NPC) and the Chinese People's Political Consultative Conference (CPPCC) for Macau youth from the industrial and commercial sectors. Under the guidance of the Economic Affairs Department of the Liaison Office of the Central People's Government in the Macao SAR and with the support of the Macao Chamber of Commerce, Wynn invited Mr. Ma Iao Lai, member of the Standing Committee of the CPPCC National Committee, Mr. Vong Hin Fai, member of the CPPCC National Committee, Mr. Lao Ngai Leong, Macau Deputy to the NPC, Mr. Sio Chi Wai, Macau Deputy to the NPC and Mr. Ho King Lun, Macau Deputy to the NPC, to provide an overview of the NPC and CPPCC to attendees. In addition, they led in-depth discussions on topics relating to the country's economic development, industrial and commercial sectors, and the assistance provided to SMEs. Furthermore, Professor Pang Chuan, Vice President of Macau University of Science and Technology (MUST), was also invited to attend and be the guest speaker of the sharing session.

Mr. Zuo Xianghua, Deputy Director-General of the Economic Affairs Department of the Liaison Office of the Central People's Government in the Macao SAR, attended the sharing session and offered guidance. Ms. Linda Chen, Vice Chairman and Executive Director of Wynn Macau, Limited, led the company's management team in joining the event. At the meeting, the five NPC and CPPCC delegates served as keynote speakers, conveying the spirit of the NPC and CPPCC and various national policies to more than 100 participating Wynn team members.

Mr. Ma Iao Lai shared the spirit behind the speech made by President Xi Jinping at the fourth session of the 13th National Committee of the CPPCC, highlighting that it would be of great help for Macau's industrial and commercial sectors to understand the country's major policies, better integrate into the overall development of the country, and optimize Macau's economy. He also said that all sectors in Macau should fully realize that they must make good use of the advantages of the "One Country, Two Systems" model and seize opportunities arising from domestic-international dual circulation. At the historic intersection of China's "Two Centenary Goals" and the beginning of the "14th Five-Year Plan", the NPC and CPPCC delegates who participated in the Two Sessions this year expressed their shared aspirations. The construction of a new model of development with major domestic circulation as the core, alongside the promotion of domestic-international dual circulation, is a priority among Macau delegates to the Two Sessions. This is particularly the case as they consider how to make use of the advantages of "One Country, Two Systems" in Macau and make new contributions to the country while enhancing the city's competitiveness and ability to withstand risks.

Mr. Lao Ngai Leong introduced the details of the fourth session of the 13th National People's Congress. He said that the Congress concluded successfully with the completion of all 10 agenda items. The Macau delegation proposed a total of 80 recommendations, including "Recommendations on the resumption of travel endorsements for mainland citizens and increase in tax allowance for tourists entering the mainland from Macau". Other suggestions include the construction of the GBA, Guangdong-Macau Intensive Cooperation Zone in Hengqin, the enhancement of patriotic education, the digital economy, and moderate diversification of industrial structure in Macao. The Congress also passed the "14th Five-Year Plan and the Long-Range Objectives Through the Year 2035". All sectors of the Macau community should actively learn the spirit of the outline, exert to support the "national needs and Macau's talent", and actively integrate into overall national development. It is believed that with the support of the central government and the joint efforts of all sectors of Macau society, Macau will be able to achieve the goals of attaining moderately diversified economic development and maintaining long-term prosperity and stability.

Mr. Vong Hin Fai gave an overview of the CPPCC meeting by sharing the focus on cross-strait relations in the government report, the work report of the CPPCC Standing Committee and the central themes. He said that the government work report provides precise guidelines for Hong Kong and Macau to further integrate into the overall national development plan and the construction of the Guangdong-Hong Kong-Macao Greater Bay Area (GBA). He added that participating in the Belt and Road Initiative and the GBA represent significant opportunities for Hong Kong and Macau. The meeting was another embodiment of the central government's support for Macau. As long as all walks of life in Macau, especially young people, fully understand and accurately grasp Macau's position in the country's reform during the new era, they will certainly be able to play a new role, make new contributions, and gain new achievements in the country's evolution, while also achieving self-development.

Mr. Sio Chi Wai introduced the direction of the National People's Congress. He noted that the promotion of in-depth cooperation between Guangdong and Macau is an important path and starting point for Macau to integrate into the country's overall development and to achieve a moderately diversified economy. The NPC and CPPCC delegates provided suggestions for Macau to seek new avenues for growth in the overall strategy of the GBA. Macau holds the advantage of "One Country, Two Systems" and has the foundation to integrate with international and capital markets. As Macau integrates into the GBA, it must pay attention to the country's overall situation. He recommended to further empower Macau's construction of the "One Platform" development direction, in order to make Macau a major facilitator of in-depth financial cooperation between China and Portuguese-speaking countries, to promote the capital allocation of Chinese assets in those countries, and to encourage those countries to deepen renminbi investment and financing cooperation with Macau. As a result, Macau will play a new role, demonstrate new power, and make new achievements in the process of enhancing mutual trust and deepening cooperation between China and Europe.

Mr. Ho King Lun gave an overview on the meeting of the National People's Congress. He highlighted that he was proud to attend this meeting as a Chinese person. The government's work report was passed with a high number of votes, reflecting the affirmation of its contents, meaning it could be a historic one. The country has not been distracted by the successful results of the previous year, reflecting that it prepares for danger in times of peace. He also feels encouraged by the country's priorities set for this year, expecting that the country's economy will experience double-digit growth in the first quarter. The "14th Five-Year Plan" and the "Long-Range Objectives Through the Year 2035" are programmatic documents for starting a new journey of comprehensively building a modern socialist country and pushing toward the "Two Centenary Goals". They are also the guides for China's economic and social development in the future. Macau's NPC deputies will continue to perform their duties diligently, fulfill their responsibilities, and work hard to serve the country, the SAR government and the general public.

Ms. Linda Chen said that the 2021 Two Sessions was held at the historic intersection of the "Two Centenary Goals", making it an important milestone that kicked off a new stage in the country's journey toward fully building a modern socialist country. Wynn hopes that the sharing session on the Two Sessions enables team members to deepen their understanding of the country's overall development, as well as to understand the reality of progress to date. This helps them to further improve their own contributions during this new stage of development, actively helping Macau achieve its goal of high-quality, diversified economic development.

The sharing session drew a positive response from various departments at Wynn. More than 130 team members attended, including senior management, back of house executives, and frontline staff, reflecting the importance of the fruitful outcome of the Congress and the Conference and its significance to Macau's development. It also further demonstrated Wynn's commitment to spreading a sense of care to all corners of the community.