Wynn hosts sharing session on the spirit of the "Two Sessions" 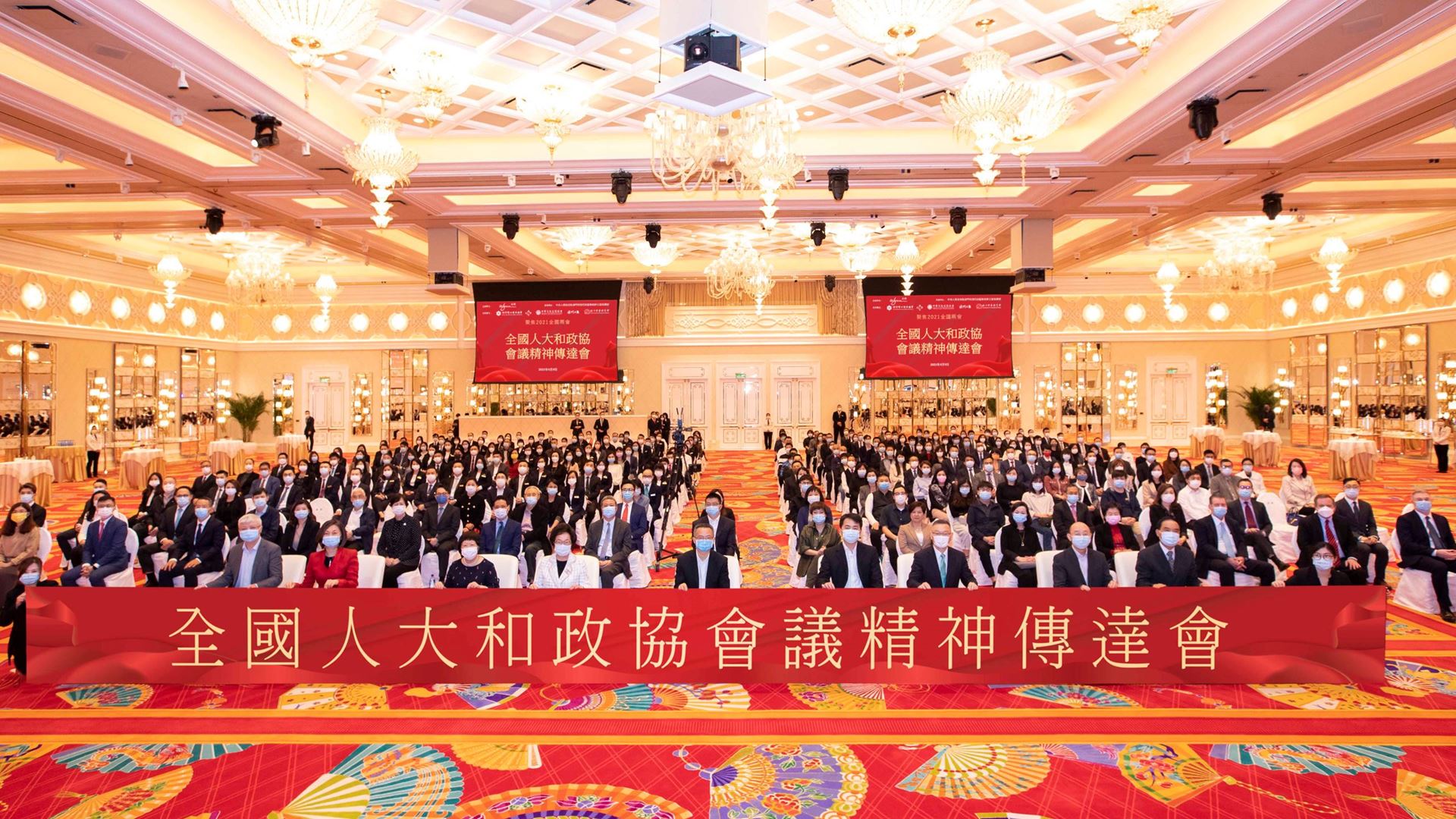 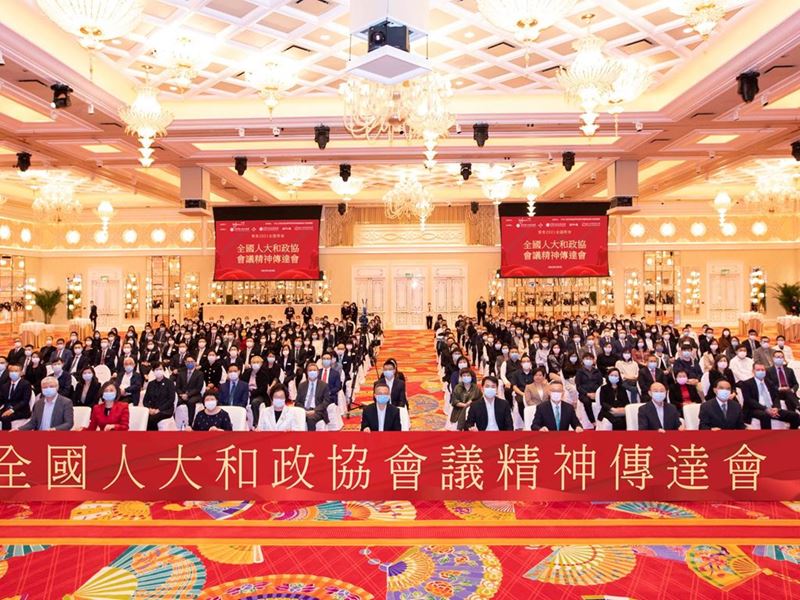 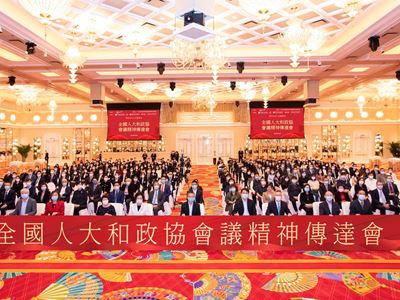 Macau, April 9, 2021 – Wynn hosted a sharing session at 3pm today in the Grand Theater at Wynn Palace on the spirit of the National People's Congress (NPC) and the Chinese People's Political Consultative Conference (CPPCC), commonly known as "Two Sessions". The event was supported by the Women's General Association of Macau, Kiang Wu Charitable Association, Chinese Cultural Exchange Association, Macao Daily News and the Chinese Educators Association of Macau, and held under the guidance of the Coordination Department of the Liaison Office of the Central People's Government in the Macao SAR. Ms. Ho Teng Iat, member of the CPPCC National Committee and President of the Women's General Association of Macao; Ms. Wu Peijuan, member of the CPPCC National Committee; Mr. Jose Chui Sai Peng, Macau Deputy to the NPC; Mr. Lok Po, Macau Deputy to the NPC and Mr. Lai Sai Kei, Macau Deputy to the NPC, were invited to share the spirit of this year's Two Sessions and provided an overview of the country's overall development to company team members. They also led in-depth discussions on the country's work report, the "14th Five-Year Plan", as well as on patriotic education. Professor Pang Chuan, Vice President of Macau University of Science and Technology, was also invited to attend and participate as a guest speaker in the event.

Ms. Ho Teng Iat, member of the CPPCC National Committee and President of the Women's General Association of Macao, gave a detailed introduction on the CPPCC. She said that the Two Sessions were fruitful, pragmatic and efficient, playing a key role in strengthening confidence and gathering strength. It set the direction for a new journey in constructing a comprehensive modern socialist country, and was a democratic, pragmatic, united, and progressive conference. Ho noted that the "14th Five-Year Plan" provides broader opportunities for Macau's future development and moderate diversification. The spirit of the Two Sessions should be accurately understood in order to be implemented into relevant work. Macau should also act in line with the country's national strategic goals to complement the "14th Five-Year Plan", facilitate the post-pandemic economic recovery, and seize the opportunity for better integration with the path of national development. She also encouraged women to be builders of good causes, advocates of civilization, and strivers who dare to pursue their dreams. They should demonstrate their unique roles in society and the family, and promote positive family culture. Ho also urged the need to safeguard national sovereignty and development interests, to continue to support the SAR government in governing in accordance with the law, and to strengthen the transmission and promotion of "Love for the Motherland and for Macau" among young people, thereby upholding the principle of "patriots governing Macau" and building momentum in society. Efforts should also be made for the moderate diversification of Macau's industry, as well as the continuous advancement of the successful practice of "One Country, Two Systems" with Macau characteristics in the new era, in the hope of making significant contributions to the realization of the great rejuvenation of the Chinese nation.

Mr. Jose Chui Sai Peng, Macau Deputy to the NPC and Chairman of the Chinese Cultural Exchange Association, shared during the session the work report of the State Council of the People's Republic of China, the "14th Five-Year Plan" and the long-range objectives through 2035. When detailing the "14th Five-Year Plan", they once again emphasized Macau's position and mission in the development of "One centre, one platform, and diversified industries". On this basis, it clearly gives Macau the new development direction of "one base, R&D and manufacturing of Chinese medicine, specialty finance, and high-tech industries". Chui also suggested that Macau be promoted to become a "technological innovation display and experience platform" of the Guangdong-Shenzhen-Hong Kong-Macau Innovative Technology Corridor. This can be done by introducing cutting-edge products such as smart clothing, food, housing and transportation from high-end technology companies from the Mainland and treating Macau as a platform for their promotion and application. This would allow technological innovation to enrich elements of Macau as a World Centre of Tourism and Leisure, as well as effectively enhancing the satisfaction and sense of achievement of Macau residents and tourists. At the same time, Macau's comprehensive tourism and leisure enterprises are encouraged to consider further leveraging their superior hospitality, conference and exhibition capabilities, seizing the opportunities provided by technology to promote the high-quality development of Macau.

Ms. Wu Peijuan, member of the CPPCC National Committee, Vice Chairman of the Jinghu Charity Association and Secretary General of Macau Jinghu Hospital Charity Association, shared that during the Two Sessions, President Xi Jinping visited members of the healthcare and education sectors who participated in the CPPCC and the joint group meeting, sending a clear signal to promote the high-quality development of healthcare and education in this new stage of development. Wu said that with the support of the country and the leadership of the Macau SAR government, Macau's achievements in pandemic prevention and control over the past year are recognized by all. Frontline health-care workers must work with all walks of life to normalize pandemic prevention and control measures and provide high-quality medical services to residents. As a member of the CPPCC, we should continue to play a dual and positive role, enhance the effectiveness of consultations and suggestions, strengthen national education among young people, and facilitate the government solving emerging problems and contradictions in the economic and social development of Macau. Wu introduced the joint proposal of a number of CPPCC members, suggesting the planning and construction of a Guangdong-Macao Traditional Chinese Medicine (TCM) Technology Industrial Park, giving full play to the advantages of Macau's "One Country, Two Systems" and the Hengqin National Development Zone. Focusing on the top-level design of the TCM Technology Industrial Park, it is also worth the tourism industry jointly considering how to organically integrate with it, maintaining the moderate diversification of Macau's industry and creating more opportunities in the common development of Hengqin and Macau.

Mr. Lok Po, Macau Deputy to the NPC and Director of Macao Daily News, said that it requires the joint effort of people from all walks of life in Macau in order to align with the country's "14th Five-Year Plan" and integrate into the Greater Bay Area. He called on all sectors of Macau to support the integration of the SAR government into the overall path of national development, consolidate the hard-won gains in the fight against the pandemic, and revitalize the economy of Macau. In addition, he expressed hope that the youth of Hong Kong and Macau will build up patriotic self-confidence, sharing in the glory of the reformative development, prosperity and strength of the motherland, and caring more about the motherland. He pointed out that under the influence of the pandemic, only China is capable of relying on domestic demand to promote positive economic growth, which proves that the policy of strengthening "internal circulation" and "dual circulation" will have a certain effect, as well as the advantages of socialism with Chinese characteristics. However, he also cited the importance of environmental protection when developing the economy and of laying a solid foundation for science and technology. In the fields of art and culture, Lok agreed that the development of the GBA needs to integrate with education and emerging industries. This could provide young people with more diverse development opportunities while promoting the spirit of patriotism and love for the country and Macau, and fully utilize the advantages of Macau and the various policies of the GBA to provide a brighter future for Macau's young people.

Mr. Lai Sai Kei, Macau Deputy to the NPC, Vice President of The Chinese Educators Association of Macau and Principal of Keang Peng School shared his insights at the meeting focusing on the "Proposals on Supporting the Hong Kong and Macau Special Administrative Regions to Enforce Constitution and Basic Law Education" jointly proposed by the representatives of Macau in the NPC. He said that since 2019, the Education Bureau of the Macau SAR, the Macau Basic Law Promotion Association, and the Centre for Constitutional Law and Basic Law Studies of the University of Macau have made an active effort to improve the content of education on the constitution and basic law and to establish clear standards for evaluating teaching quality. Due to the inadequate quality of teaching materials, teaching capabilities and training, Macau's primary and secondary schools still need to make targeted enhancements in their approach to constitution and basic law education. As such, he suggested arranging for experts to compile a series of textbooks about the constitutions and basic laws of the Hong Kong and Macau SARs while also strengthening the training of teachers, guiding and supporting Macau to optimize the evaluation of teaching plans on the constitution and basic law. This will further improve the framework for patriotic education in Macau, strengthening young people's sense of belonging to the motherland. Above all, this will be beneficial to the sustainable and long-term development of "One Country, Two Systems", enabling society to maintain prosperity and stability.

Ms. Linda Chen said that 2021 is the first year of the implementation of the "14th Five-Year Plan" and the start of a new stage in the country's journey toward fully building a modern socialist country. Wynn hopes that the sharing session on the Two Sessions enables team members to deepen their understanding of the country's overall development, work together cohesively for the start of the "14th Five-Year Plan", and to work hard for the country, Macau, and the development of society, thereby firmly striding towards its goal.

The sharing session drew a positive response from various departments at Wynn. More than 250 team members attended, including senior management, back of house executives, and frontline staff, reflecting the importance of the fruitful outcome of the Two Sessions and its significance to Macau's development. It also further demonstrated Wynn's commitment to spreading a sense of care to all corners of the community.